Here is my artistic response to this week's Soul-Calendar-05 meditation verse by Rudolf Steiner. For a brief introduction to this project, please see my first couple of posts on the blog pages. See also calendarofthesoul.net where you can see a range of translations into English and other languages. By the way, I am not in any way suggesting that my translations are preferable to any of the published translations. But I don't want to infringe any copyright, hence I am offering my own, literal, translations here.

My translation
In the light, that from spirit-dephts
In space fruitfully weaving
The gods’ creating reveals:
In that appears the soul’s essence
Widened to the world-being
And resurrected
Out of narrow selfhood inner power.

My interpretation of the soul-calendar-05 meditation

We could look at the verse in an almost literal sense, in that it talks about the light, the light that we can see with our eyes, or more accurately, the light through which we can see the world around us (we can't really see the light itself). But Steiner says the light comes out of spirit-depths. Whose spirit? My own, or the universal spirit, the cosmic spirit, the origin-of-the-world-spirit? This light weaves creatively, fruitfully in space and makes manifest, visible, the work of gods. The work of gods (plural)? It appears that here Steiner refers explicitly to the hosts of spiritual beings involved in the process of world-creation, which is revealed to us through the light. But at the same time, it's not only revealed in the more literal sense, in the sense of the visible world being revealed to our senses through the light. There is much more going on here. Because in that same light now appears my soul, which is invisible to the eye and yet it is part of that created world, a creation also by those same gods who work at the foundation of the whole world. Those same gods created, create and re-create my soul's essence, which now looks/feels outwards and experiences itself as one with the world and thus widened, expanded, swelled up, to be the world (not just the earth, but cosmos as a whole). And thus I have overcome myself, I have grown beyond my daily self, I have risen out of my ordinary self. This could be understood as that I have risen above this ordinary self, but also that I have been able to do this because of my ordinary self. The inner power of selfhood has given my I the strength to rise up out of the confines of that self-same selfhood. And as always, the consciousness that is brought to this by the verse itself means that I am learning to see this process and maybe learning to feel how my thinking, feeling and willing, when widened out into the cosmos, become one with it? 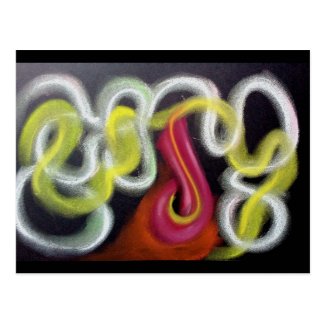 Calendar of the Soul 05 Postcard
by lartiddo 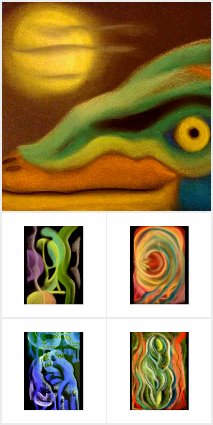